In the early 1970’s Northwest Phoenix was a rapidly expanding area of the valley. The Black Canyon Freeway was just completed to beyond the then city limits and its construction was continuing toward Black Canyon City.

The Metrocenter Mall, the largest of it’s kind at the time, was under construction. Developers and builders were fast changing the vegetable fields and orange groves of John Jacobs Farms – and others like it – into hundreds of homes. The population of Phoenix was growing and moving northwest.

A young member of the Mesa Roadrunners Lions Club, Bob Wines, had just returned from Oregon. He had noticed this expansion of Phoenix and had established his new business in the northwest area. He had looked around for a Lions club to transfer into. There were none to meet his convenience. It is Bob’s nature that “If we don’t have it, we’ll make it.”. And so he did.

While this recruiting was going on, Lion Bob visited the Phoenix Midtown Lions Club and asked for their assistance to organize and sponsor a new club. It is not clear if the Midtown Club was recommended to Lion Bob by District Governor Lion Will Stevenert but Lion Will helped in the organizing of the new club. Past International Director, Lion Floyd Hammon was assigned as Guiding Lion.

Lion Bob tells the story of finding a meeting place:

“We (the committee) had checked several locations for group meetings. When we visited the newly opened Denny’s restaurant along the newly built Black Canyon Freeway, the manager was just cleaning a newly installed coffee maker. We asked him if he could accommodate a Lions Club on Tuesday evenings. He was really elated! We shared the first coffee brewed in his new maker and discussed the arrangements for our meetings.”

Denny’s became the home of the newly formed Lions club.

Come in to learn about Pathways To Reading and how you can support it! 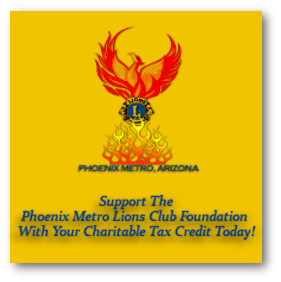